Lionesses in the making!

On Thursday 10th October, Milton Road girls and mixed football teams headed off to Netherhall football field to compete in a football tournament including 11 other teams from Cambridge. At 12:00 in the morning, both teams jumped into one mini-bus and three cars. It took about 20 minutes singing in the vehicles to get to Netherhall. When we finally arrived, we headed to the pitches, dumped our bags and prepared for our first match.

The girl’s football team had three players who had never even touched a ball yet they owned the field like they had been playing for years. Our first match was against St. Lawrence’s team. They played well but we beat them 2 – 1. We then went on to win

The results were outstanding, the only thing left was to find out our place in the ceremony. The games were tough and we were pushed to our limits but we carried on fighting, this came out to help us miraculously. Football teams were called out name after name, from 11th to 6th we still hadn’t been called out, we started to get ecstatic, wondering whether we would go through to the counties.

It had come to the time when second place was being announced, one of our team members (Kalina) giggled “We either came 1st or 2nd or we were so bad we weren’t on the list!” which made us all laugh. We were anxious to find out the results, we would have been happy to come second but happier to come first. Second place was announced…St Lukes! We had come first!! We cheered for the other teams but we were so excited that when we got up we almost fell over. We went up to the front to collect our gold medals and even get a handshake from Marvin the Moose (Cambridge United’s mascot)! We jumped with excitement, and ran to tell the mixed team. Our hard work had paid off.

Thank you Mrs. Brown-Roche and Mrs. Dasher for all your support!

The mixed team had some stiff competition up against experienced teams from all around the city. They played valiantly and with great skill.  In this round robin competition, points were totted up and the results given at the end. Milton Road Mixed team had come 6th out of 11 teams with the win going to Colville. Well done to all the children who took part and the adults who helped with organising, supervising and transport. 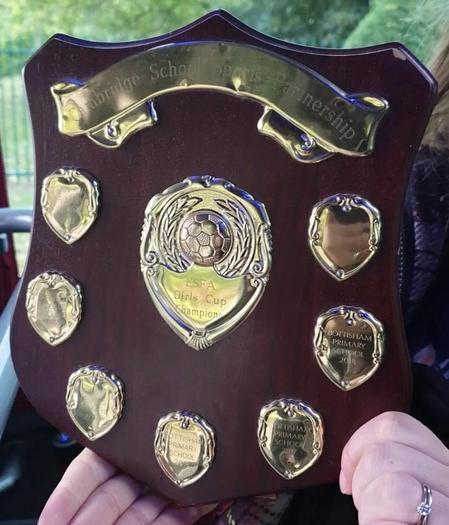